"Poor Alice in Nothingland" by Ace

Ace submitted a text. To critique the piece, comment below.

The route was on standby and the road was white. There was nothing but a long and distinct path that wound it's way to nowhere. It seemed to Alice that there was a stop sign at the end of it, but for her name's sake she could not reach it. Like the "la la la la" melody floating in the background it seemed so far. Her eyes rose into a chapter not so near but not quite far into her life. In an incomprehensible scramble, her conscience turned the page.

Of all the foods Alice had had, before arriving in Nothingland, strawberry cream cake was the best. In Alice's world she called Wonderland, she'd dream of monsters and devils. Or so she called them, for others would say the "undead". Wonderland was a place for dark fairies such as Alice, were one of such nature could roam, free without glares or stairs. Her imagination was empty, and Alice could not do with the creative art called cooking, for she barely ate. Also, she was not in Wonderland, she was in some distant place called England.

How does one make strawberry cake when one cannot cook? I will make the worst strawberry cake ever; I cannot tell salt from sugar. I do not like food. Vampiress suits me best as my only need would be blood, and I could live in the shadows of Wonderland forever. All to hell those who cook!

Alice was a girl of 18 with a conscience of 3, her eyes dug deep into her skin. Un-Princess of pallor, there's such as thing as dark and such was Alice's skin. If you've seen long black hair, tangled as in decadent nightmares, you'd understand what sits upon her head. Below her waist, above her knees she let it loose and free. Her mother would dress her in blue, in blue, in blue. Light, always, and nothing more, her dresses were never long nor short. If her mother said wear than she shall wear. Always respect the mother. In Alice's dreams she was the Victorian queen with velvet, hats and boots.

But, this was not a dream, and Alice picked up the sugar, lime and eggs. Freshly picked from her not-own hands on official Louisiana soil. A farm of growth, a house of luxury, this is where Alice lived. Three maids for a room (or perhaps that's exaggerated, but something of the likes anyway) two cooks for each, the mother of the daughter, the daughter of the mother. And, a fairly strange gentleman who answers the door. A fully equipped house indeed, one person for one and each function. How wonderfully wonderful. But perhaps not for Alice. That is why Alice wanted to make a cake, particularly a strawberry cream cake. She was going to break the rules of a good lady, and make something of her own. An adventurous task; a risk.
Now how anything was made, Alice did not know. Her apron was on, her silk gloves off. She had beaten the eggs, strawberries, sugar and limes and added it all in a buttered pan, topped off with heaps of flour. In the oven, out the oven. The cake had not risen nor fallen.
Strawberry cream cake.

The taste matched the looks. Alice never ate strawberry cream cake again.
at 4:49 AM No comments:

Email ThisBlogThis!Share to TwitterShare to FacebookShare to Pinterest
Labels: Text

A new version of the guidelines has been published. You can read it on this page.
at 9:10 AM No comments:

Email ThisBlogThis!Share to TwitterShare to FacebookShare to Pinterest
Labels: Staff

Twitchy submitted a text. To critique this piece, comment below.

“There, the Nikon Monarch, best in the market.” You mumble to me, brandishing the hunk of black with glinting lenses above your head. “Catch!” You command.

“Don’t thro—” I protest, a bit too late as my arms walk the dots of a mini-kerfuffle. It lands, heavy, in my hands and I look at you reproachfully for nearly damaging a fine-piece of equipment. Yes, you were my Conscience, but that was never a good excuse for maltreating a machine.

Your eyes never catch mine, they were far away, staring over sinew, muscle and tube.

“Them white doves never seem to be very good at roosting here, do they?” You say dismissively as you gnaw on a piece of dried cuttlefish. Strange, I didn’t know there was dried cuttlefish in a Godforsaken place as this. Still, I shrug, holding the pair of binoculars to my eyes and staring out.

I watch as the last ones shook flakes of dried blood off their feathers, preening fussily and pecking, harassed, at the heart that no longer beat properly before they stretched and flew out of my mouth. Gaped in a silent sob.

Them hopes never were good at staying in one place. Not least my heart.
at 8:46 AM 1 comment:

This is a sample post to further explain how getting critiques works. 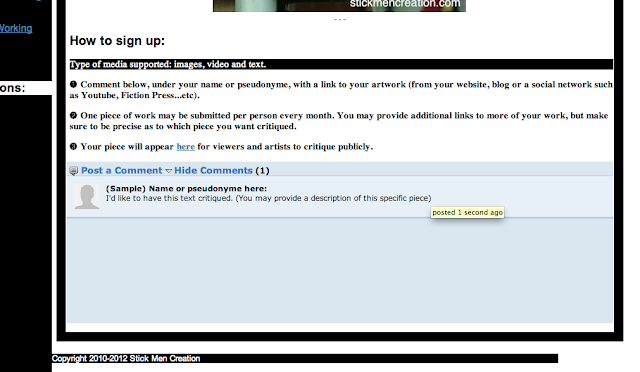 - Link to the original location of the author's work

- If the author has chosen to describe their work, a description will appear here:
Description.

- The sample author has chosen a text. It will appear here:

Maya was a little girl walking down the path of a deep forest. There where cypresses along the road which she skipped along joyously. There wasn't much to do around her grandmother's besides walk the forest path. She would pretend there were monsters and wolves in the darkness, they would jump out and scare her. Then, she would remove the kitchen knife from her pocket and pretend to stab them. It was thrilling. But, she was always home by nightfall.

This, Maya had remembered forever. She was dead now. Once, a real monster had attacked her. A monster disguised as a man. He had used an unloaded gun, which he'd tried to hit her with. She had stabbed him in the head: a fatal blow. Afterwards, she'd gone home, eaten her macaroni and cheese, and died of untreated apendicitis.

- Additional information about the author such as their website, blog or more work is placed below:
Information.

- A critique by Stick Men Creation- the website will offer constructive feedback for the piece.

Email ThisBlogThis!Share to TwitterShare to FacebookShare to Pinterest
Labels: Staff

Welcome to the Official Critique Blog!

Stick Men Creation is introducing it's new critique blog. Every first week of the month, viewers are allowed to 'sign-up' for a critique by posting a link to a personal piece of their choice on the main website. For an easy 3 step guide on getting your artwork critiqued, and to get started today, visit here. 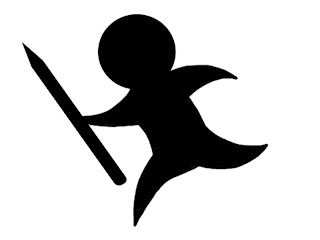 How does it work?

Once an individual has requested a critique, their credited work will be featured on the blog, allowing viewers and artists alike to give them constructive criticism. At times we offer critiques too, so as to make sure each artist gets a chance.

For a quick tutorial on giving constructive criticism, check out this article.

Stick Men Creation
at 8:48 AM No comments: